Written by Pippa Strickland from iDiveblue.com

It’s tempting to pick up an attractive shell or piece of coral and place it somewhere in your home as a memento of your underwater adventures and constant reminder of your connection with the marine world. You might think that just one shell won’t make a difference in the big scheme of things. But with every shell or piece of coral taken from its natural habitat, the ecosystem suffers; resulting in long-term consequences that could be devastating for our reefs.

It’s estimated that around 1.5 million live stony corals and 4 million pounds of coral skeletons are removed from marine ecosystems across the world each year. That doesn’t include the almost 10 million marine invertebrates of around 5,000 different species that are harvested for the curio trade, as well as seahorses and pufferfish. They’re destined not only for people’s homes but also to supply the aquarium industry and for the creation of coral jewelry. While some of this is sourced legally, a large portion is taken and sold without permits as part of the $19 billion (USD) illegal wildlife trade.

But of equal concern is the legal trade of shells and corals with beachside vendors, resort boutiques and local markets often selling mementos sourced from local waters. It’s difficult to tell which species are endangered or threatened and rarely do you know how sustainably they have been harvested. On first glance, it may seem like a good way to support local people. But the cumulative effects of countless tourists purchasing “just one shell” or piece of coral are threatening reefs through over collection and habitat destruction.

When you purchase a shell, chances are it once provided habitat for a mollusc, such as a sea snail or mussel. These invertebrates are removed from the shells before they are polished and put up for sale with the animal left to die. When too many mollusc shells are removed from coral reefs, it may gradually disrupt the delicate balance in an already fragile marine ecosystem.

One such example is Charonia tritonis (Triton’s Trumpet), a sea snail that inhabits a striking shell known to grow up to two feet in length. They are highly sought after in the curio trade with around 10,000 thought to have been harvested annually between 1947 and 1960. This has led to a severe decline in their population numbers, particularly on Australia’s Great Barrier Reef where they played a significant role in controlling Acanthaster planci (crown-of-thorns starfish).

Crown-of-thorns devour corals for their nutritious polyps and, in healthy numbers, they play an important part in eating faster-growing corals. This enables slower-growing species to thrive and supports greater coral diversity. But, when not kept in check, they can devastate large areas of coral reef in a matter of just a few days. Triton’s Trumpet feeds on these starfish using its sharp, poisonous teeth and is one of few natural controls available to tackle the crown-of-thorns issue that is laying waste to huge areas of the Great Barrier Reef.

Shells washed up on the beach or abandoned by organisms may appear to be doing “nothing”. But they play an important role in stabilising beaches, providing colonisation surfaces for algae and offering habitat material for other species. As shell materials dissolve, they recycle elements back into the local calcium carbonate cycle. The large-scale removal of shells from their natural habitat may have significant biogeochemical consequences for the global marine carbon reservoir.

Coral poaching is the illegal harvesting of coral from protected reefs that lie within nature reserves or marine parks. Not only are the reefs often physically damaged in the process as coral is broken, stepped on or blasted with dynamite but the reef’s ability to support a healthy surrounding marine ecosystem is significantly impeded.

Coral reefs protect the coastline from storm damage and play an integral role in recycling nutrients to the surrounding water. They provide an important source of nitrogen and other essential nutrients for the food chain while offering habitat and shelter for a diverse range of marine organisms. The continual harvesting of corals may lead to some species becoming endangered, threatened or even extinct as their ability to find shelter, safety and food are hampered.

Around 25% or all marine life depends on coral reefs to survive, although the impact will be felt on a much wider scale when you consider the natural predators that will also suffer if coral reefs are destroyed. It could also have significant knock-on effects for our commercial fishing industries and the communities who rely on seafood as their main source of protein.

The survival of coral reefs is in our hands

It’s no secret that coral reefs play a vital role in supporting healthy oceans and provide habitat for an abundance of marine life species. But it’s easy to overlook the fact that a simple purchase of a shell or marine curio is directly impacting their future survival. As marine resources become overexploited and the health of local reefs suffer, the people that rely on the curio trade as their source of income will also be negatively impacted. So rather than supporting this short-term industry, why not purchase a traditional handicraft or hire a local guide/boat owner to take you exploring while capturing photos and memories of your adventure.

While conservation organisations are playing a vital role in trying to stamp out illegal coral poaching, each individual can play their part in choosing not to take shells as souvenirs or buy coral products when on vacation. While they may look attractive on display in your home, you’re thwarting their ability to help maintain the natural balance of our marine ecosystems. Even more impressive than seeing them dried up on a shelf is observing them alive and thriving in their natural environment during a responsible scuba diving or snorkelling vacation.

Thanks to Pippa for this insightful guest post! Don’t forget, Reef-World and the UN Environment Programme (global coordinator of the Green Fins initiative) provide FREE materials to help you raise awareness of why you shouldn’t collect or display marine life. 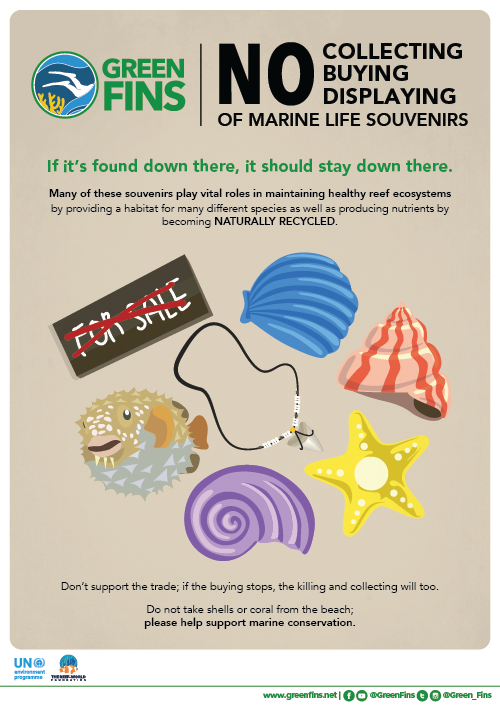 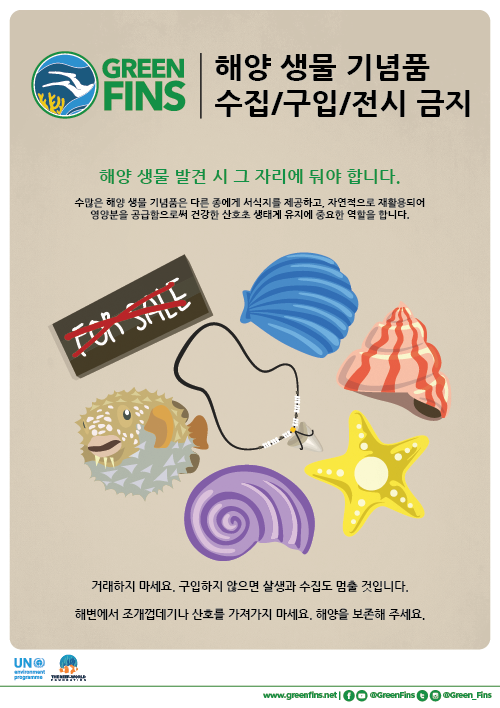 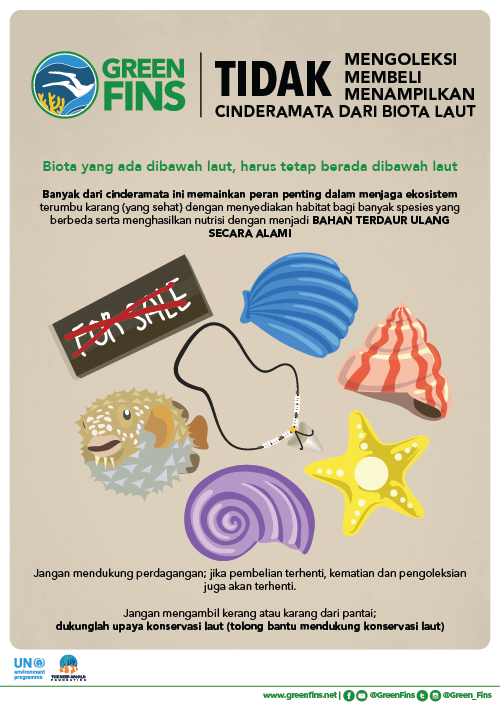 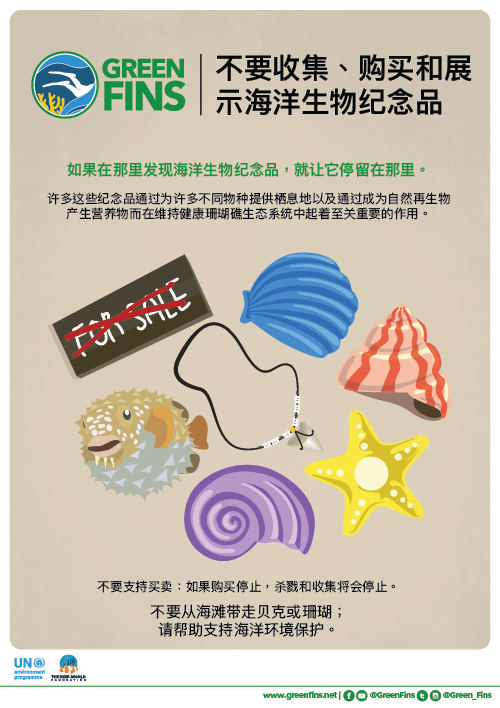 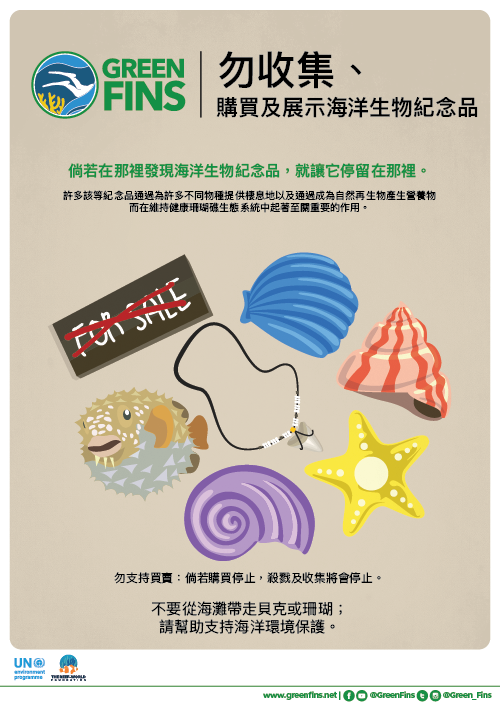 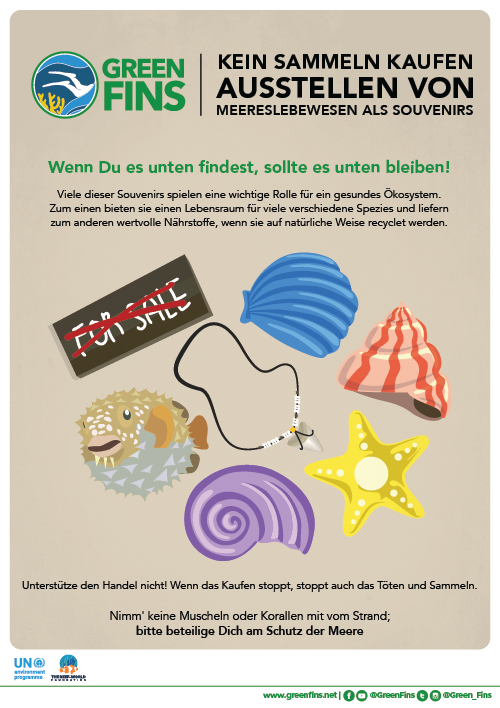 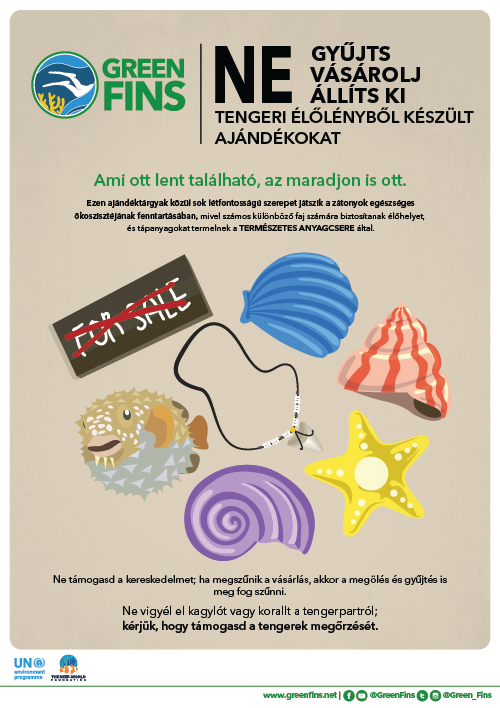 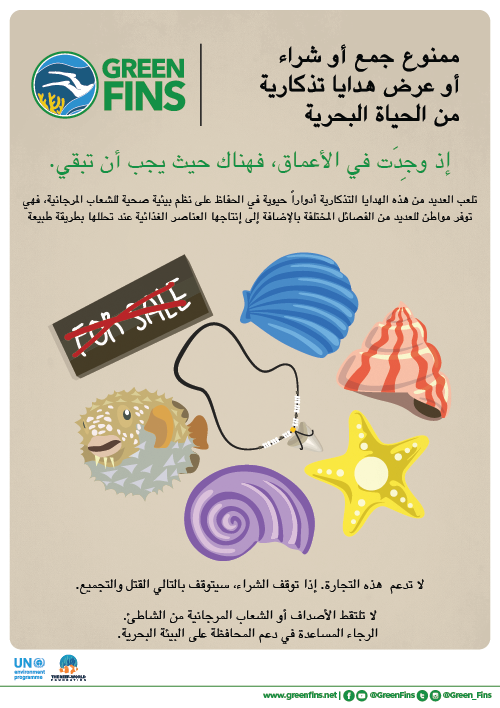 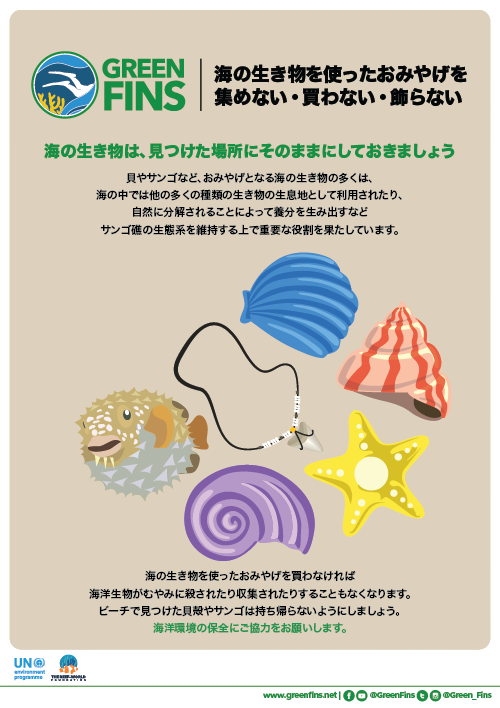 If you’re interested in becoming a Green Fins member, find out how to join.