5 Reasons Why We Shouldn’t Feed the Fish

One of the best things about snorkelling or diving is being immersed in a world of marine life. Being surrounded by so many brightly-coloured, tropical fish is a thrilling experience. This is usually the reason why some divers and snorkellers like to feed the fish with food scraps, like rice or bread, to encourage them to come even closer.

But did you know that doing this is actually harmful to the fish and their environment? Here are a few reasons why we shouldn’t feed the fish.

It disrupts the balance of the ecosystem

Marine ecosystems are underwater communities; a network of life where everything is connected. This means one seemingly small change can have a huge knock-on effect. When snorkellers or divers feed the fish, it alters their natural behaviour, disrupting the delicate balance of the ecosystem. This can lead to the destruction of the reef itself and the incredible array of life it supports.

It can lead to algae smothering the coral

Algae might not sound like the tastiest snack to us but, for many fish, it’s a staple meal. By eating algae, fish aren’t only keeping their natural diets in check but they’re also providing a sort of gardening service by controlling algae growth. This means that if the fish find their food elsewhere (i.e. from humans), the algae on the reef could start to grow out of control; smothering the coral and causing it to suffocate and die.

It leaves nests vulnerable to predators

If you’ve ever seen a diver or snorkeller feed the fish, you’ll know it can stir up a frenzy! Fish will rush to the food source, competing with one another to gorge on as much as they can. But when species that are usually solitary demonstrate this kind of group predatory behaviour, it leaves nests unguarded and vulnerable to predators.

It can actually lead to starvation

This might sound a little weird but feeding fish could actually result in them starving to death. This is because most marine animals have a pretty specific range of digestive bacteria. When they’re fed the wrong kind of food (like rice or bread), it can lead to the wrong type of bacteria becoming dominant in their stomachs. This could result in the fish no longer being able to digest their natural food and starving to death. And no one wants that!

Crown-of-Thorns can grow out of control

The Crown-of-Thorns starfish (COT) is a sea star named for the spines that cover its body and arms. These guys are well-known coral predators. Any diver who’s witnessed their path of destruction will know just how harmful they can be to coral reefs if population numbers get out of control.

Normally, pesky COTs are kept under control by fish who unwittingly eat their eggs while grazing on algae. But when these fish are fed by humans, they no longer need to graze on the algae. This allows predator populations to increase, causing serious damage to the reef.

Most divers or snorkellers who feed fish don’t realise the impact it can have on the health of the reef and other marine life. Whether you’re a dive operator or an individual diver, our Green-Fins posters are available to download, display and share for free. They’re a great resource to educate others and a handy reminder of the ways we can all do our bit to keep our coral reefs healthy! 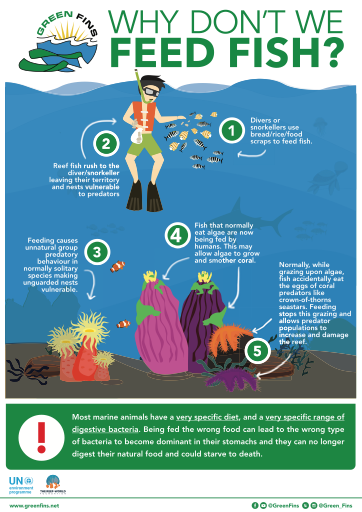 Why we don’t Feed Fish Infographic 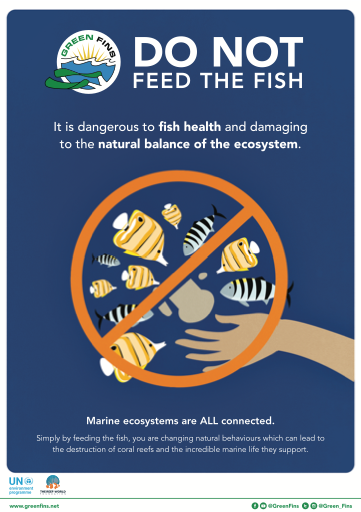 Do not feed the fish poster 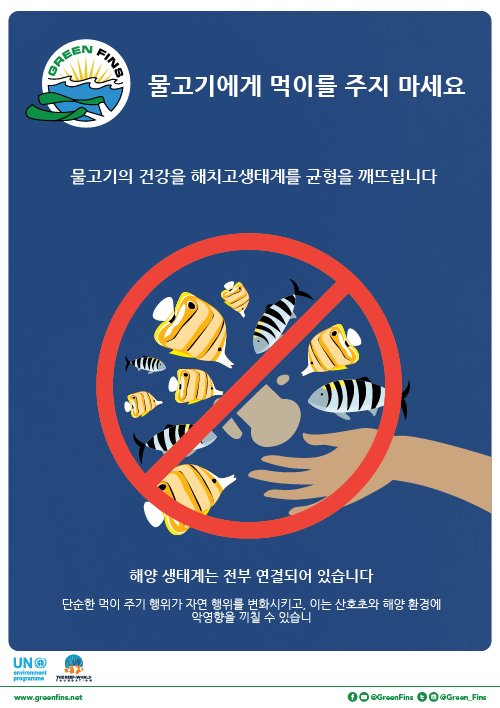 Do not feed the fish poster (Korean – 한국어) 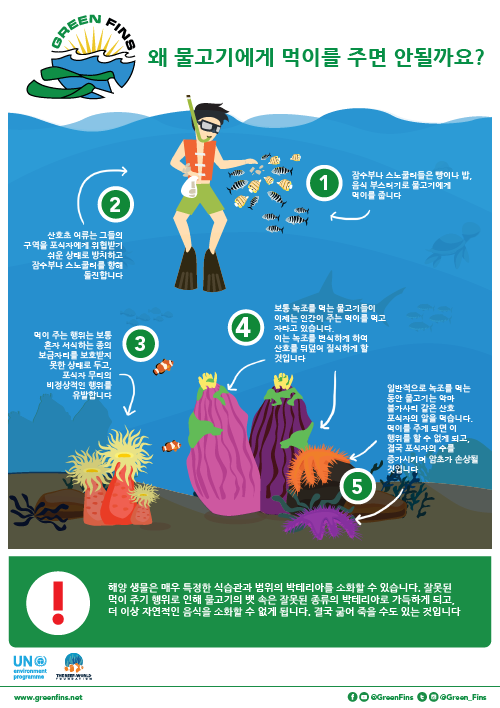 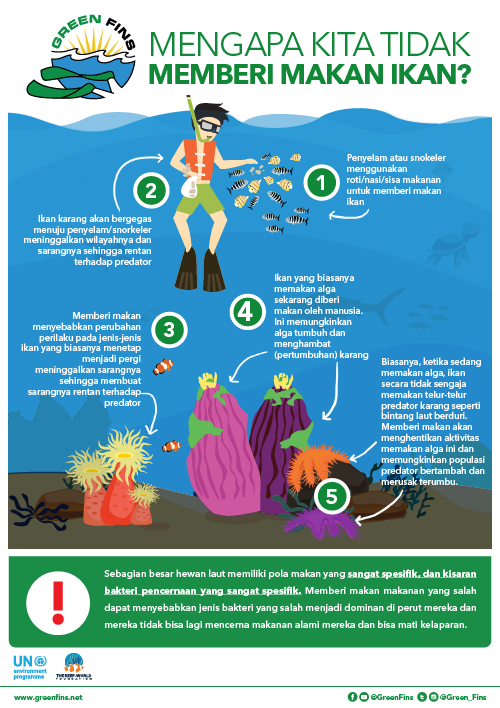 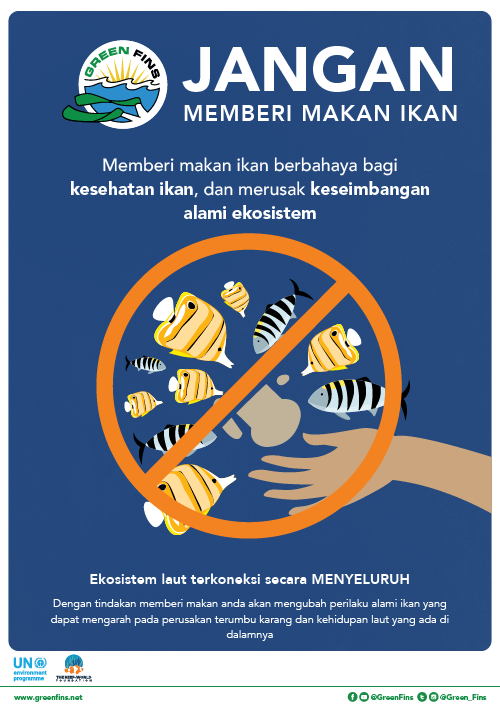 Do not feed the fish poster (Indonesian – Bahasa Indonesia) 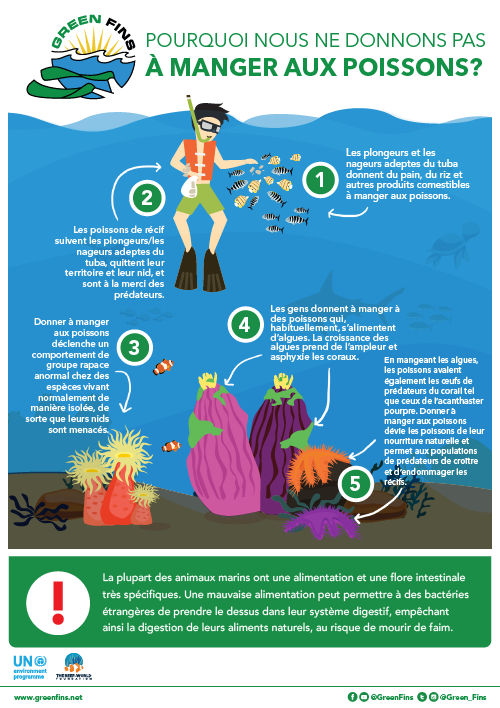 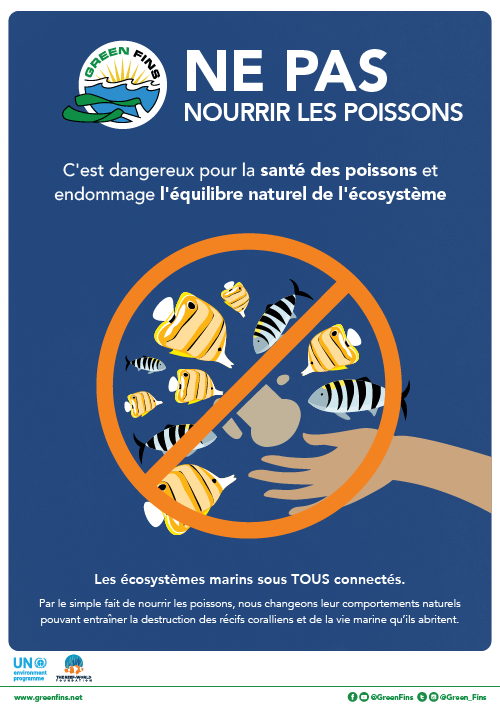 Do not feed the fish poster (French – français) 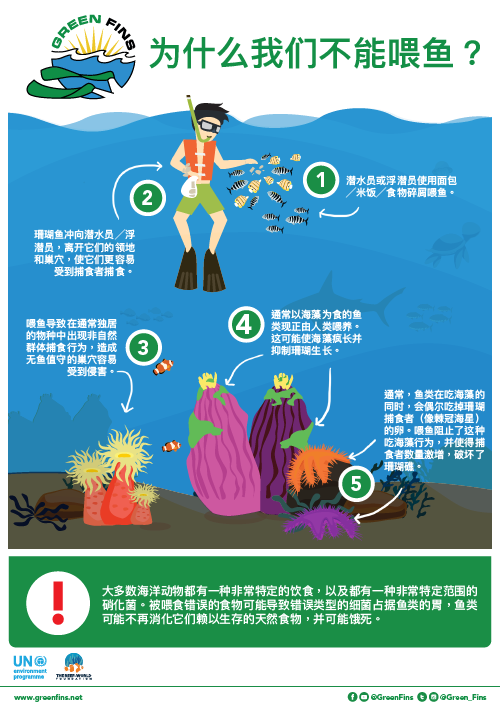 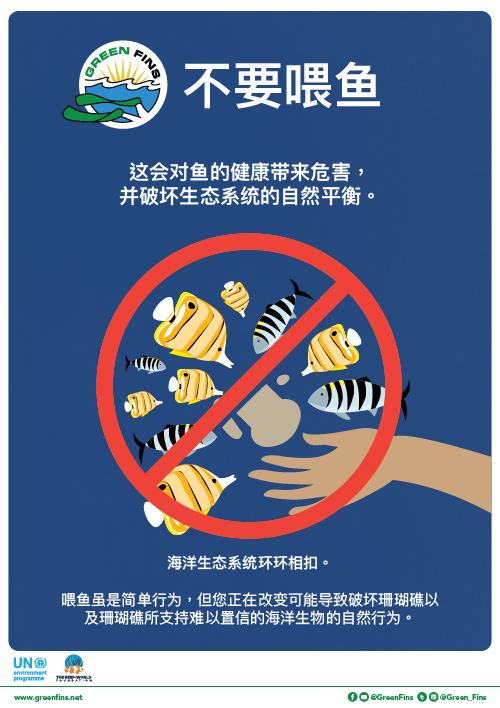 Do not feed the fish poster (Simplified Chinese – 简体中文) 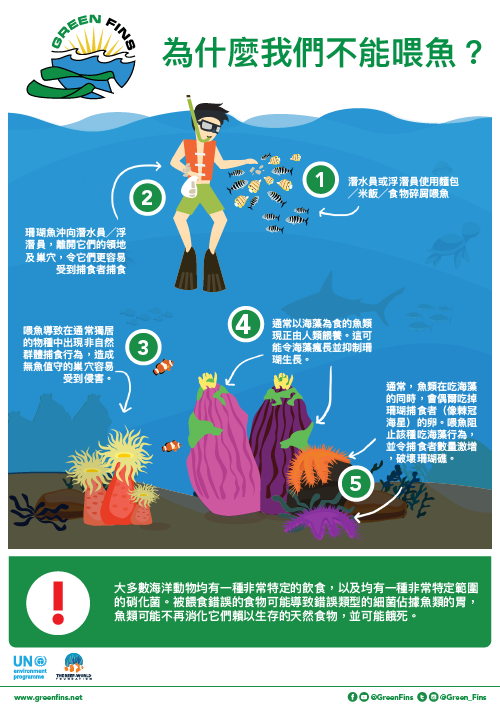 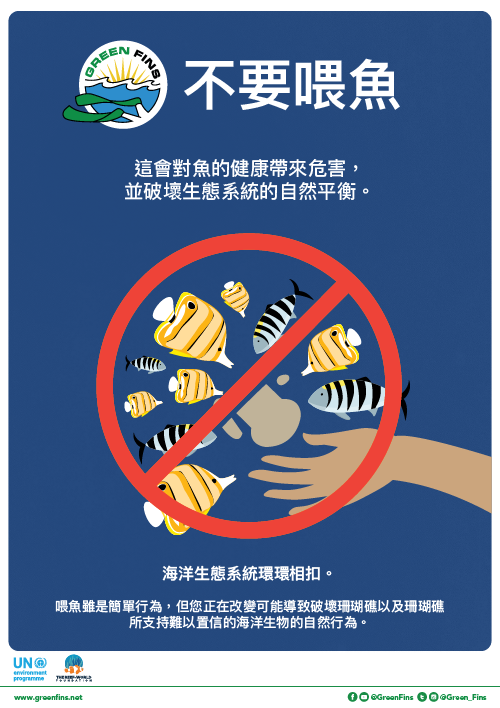 Do not feed the fish poster (Traditional Chinese – 繁體中文)

Thank you for supporting Reef-World and the UN Environment Programme’s Green Fins initiative!